A Conversation With: Øivind Slaatto

He has designed objects that have become stand-ins for who he is, but as this exclusive conversation with Portfolio proves, Mr. Øivind Slaatto is much more than the sum of his works.

A clear image forms in people’s mind at the mention of BeoPlay A9 speakers and Patera lamps. The name Øivind Slaatto, however, is probably known to a limited circle of design professionals and enthusiasts.

But this is comfortable reality for the Danish designer behind these well-known objects. He has always maintained that he is more than the collection of his works.

And, indeed, he is. Mr. Slaatto is a professional musician, a polymath who explores science and the arts with natural facility and, as it happens, often uses them to inform his designs.

Portfolio: We may look at you as an international design figure but you represent the culture, and the validity of you being on an international or global stage depends heavily on where you came from, because you have something unique to share.

Øivind Slaatto: Especially in a more globalized world that is strongly connected, local culture gets more important. I'm very much aware of it when I name products, so, don't try an English name.

When a product has a Japanese or an Icelandic name, I find it more interesting because it says something about the culture it comes from.

Globalization has a way of homogenizing things to the point that we understand each other based on our commonalities, when, in fact, we should be interested in each other’s differences because they’re really fascinating.

Yes, you're talking about diversity, and I find that a rich society is one with high cultural diversity. Having dinner with yourself is not very inspiring, but if you are with someone who is much older or younger, a man or a woman, with a different political point of view, and different life experiences, you can have a stimulating conversation than if you talk to somebody with the same political views.

Giving objects a native or local name gives a context that makes us consider it from a different perspective. Is that how you name your works?

Honestly, I'm not very good at naming; it’s not my main thing. When I design, I try to find out the essence of what I’m doing.

When it comes to lighting, the most essential light source that we have is the sun. My idea for Patera was originally to call it Sol, a Danish word for sun, but sol was already taken.

Meanwhile, Patera is Latin for ‘seed capsule’. If you look at it, Patera looks like the sun but it also has this natural pattern that you can find in anything that grows under the sun: the Fibonacci pattern, the geometry of pines, of a pineapple.

Patera is not a Danish name, but it's better than an English name. The thing is, now we speak English, which is a lovely language, but it's also important to speak one’s own language.

The Patera lamp as the centrepiece

Was design something that you dreamed about or planned to do? Were you naturally design-inclined?

We didn’t have a television when I was growing up, so we made drawings. We also played sports and music.

My parents are musicians, so we all spent a lot of time rehearsing. In the beginning, I played the violin and the recorder, then I studied at the Royal Danish Academy of Music and became a professional tuba player.

My first education was classical music, but I drew and designed all the time. I didn't know then whether I should study design or music.

I went to the conservatory and I think I became quite successful, but I missed doing something physical and concrete. I also couldn't see the real value of music.

It’s almost ironic that you’re telling me that Georgia was not as rich as other places and yet the comfort that you got from it was tremendous.

If you think about cultural riches, then Georgia is one of the richest places I've ever been to. What makes a life worth living, for me, is culture.

When you meet a person, you often ask what kind of music he or she likes to listen to, not which bank they’re using.

Does your knowledge of music inform your work in design? When you listen to workmen’s songs, for example, you’ll find a certain cadence or rhythm that mimics that of working.

I would say definitely yes. The way I see this is how I use music today.

When I play an instrument, it's important for me to train my inner ear to hear the music before it's made.

The transformation from understanding the notes in a sheet music is what gives it meaning; it’s how I interpret it.

Another thing that I find fascinating is that when we hear something in a foreign language and instantly understand what is being said. We laugh along or get upset over something just by listening to sounds even it they are foreign to us. I think that's the magic that you were talking about, the understanding and empathy. Without you being part of the culture, you have access to it simply by being human.

Yes, and I think what you said is really interesting because you could also ask what is language? Language is partly auditory and partly visual, so, as we communicate now, we're also communicating with some microscopic movements.

We don't understand it with our intellect. It's our sub-conscious that’s doing this and we're sending signals across the table billions of time faster than our intellect.

Many of these kinds of signals disappear when we are talking to each other through a screen. It’s also why many of communication can go completely crazy if we don't understand the context – “if we don't read the air”, as the Japanese would say.

I have read that we lose one language every two weeks. If you lose a language, you lose a way of perceiving, articulating, and expressing. Your earlier point on naming a lamp – it's not as simple as calling a product something you like, but it's really based on your perception, worldview and culture.

Just to give an example of this: In Greenland, they have more than 20 words for 'snow'.

When you're writing by hand, this is more than just communication. I would say language is not everything, but it is extremely important and you need to be very aware about how to use language because language is also a way to use power, to build a nation, to misuse power, to create violence.

BeoPlay A9 speaker in white

If we consider your body of work, what do you think it says about you as a person, your beliefs, your culture?

Of course, I have the skill and talent to create some really beautiful objects, but also to challenge the way we manufacture and, in the end, sell what we made.

I think, everyone who has some skills also has a responsibility to contribute to society. Instead of just reproducing, we must ask, "This is where we are now. Where would you like to go?"

I try to contribute in that way, too, towards a society where I want to live in. I think my products are timeless in terms of not being based on trends but made in respect for humans and made with an ambition to last.

I think that is something that is quite deep in the Danish design DNA. You try to make it with respect for life. 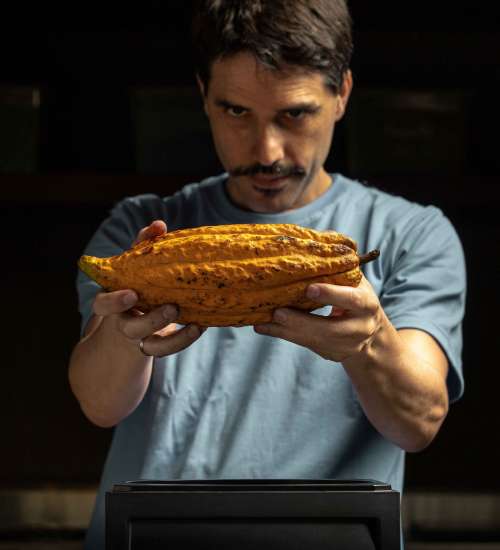 A Conversation With: Øivind Slaatto