Bugatti has named a hypercar after one of its former champion race car drivers of the 1930s, Louis Chiron

Southeast Asia’s first Bugatti Chiron was delivered to a Singaporean private collector just before the Lunar New Year this year. The hypercar is stored in a climate-controlled facility for its owner by Wearnes Automotive, the agent for Bugatti in Singapore. This new and impressively expensive motorcar marks the first of 20 motorcars that will be delivered to customers in Asia between now and 2020. The Singaporean owner went with a dual color paint finish of Atlantic Blue and French Racing Blue, which pays homage to the original Bugatti Chiron unveiled at the 2016 Geneva International Motor Show. To complement the two-color exterior, the owner opted for a full leather interior in the tan-and-brown Terre d’Or color scheme.

The Chiron is one of the world’s fastest, most luxurious, exclusive, and arguably most expensive hypercars ever built. To retain its exclusivity, Bugatti has declared that only 500 of these cars will ever be produced. Customers around the world have already purchased three quarters of the planned production.

Unlike its closest competitors — the McLaren P1, LaFerrari and Porsche 918 — the Chiron is not a hybrid. Its engine is a development of the legendary Bugatti Veyron’s 8.0-litre quad-turbo W16, while the car’s gearbox is a strengthened version of the Veyron’s seven-speed twin-clutch transmission. The Chiron, it seems, was made to challenge the very limits of materials and physics. 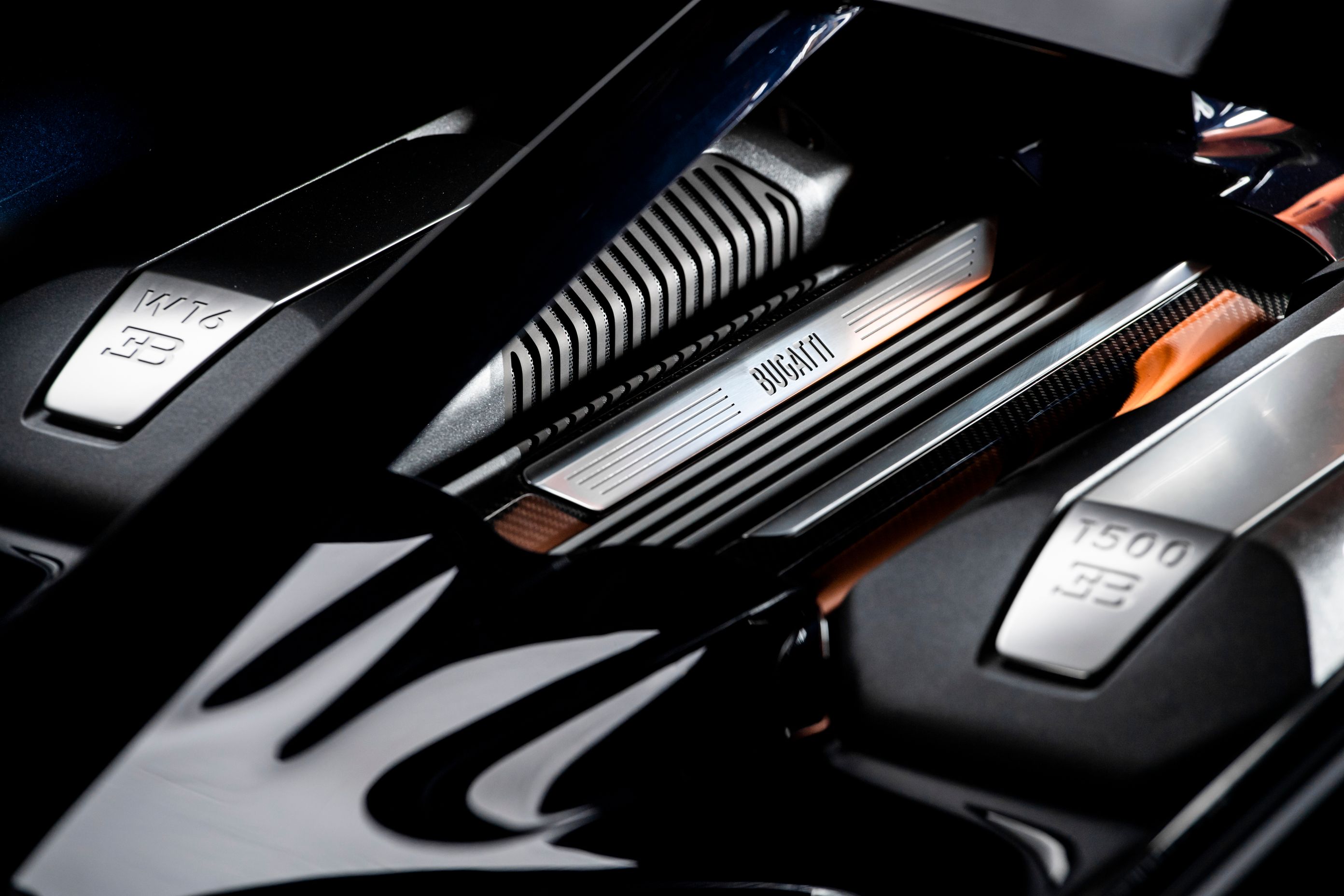 Bugatti CEO Mr. Wolfgang Durheimer explains, “If we went with hybrid, we would have added additional weight. We would have experienced package constraints, too, because this car doesn’t have any areas where you can put additional stuff, so the styling would need to change. We will dramatically raise the bar in terms of top speed, increase the power by 25 percent, with both aerodynamics and road holding better.” 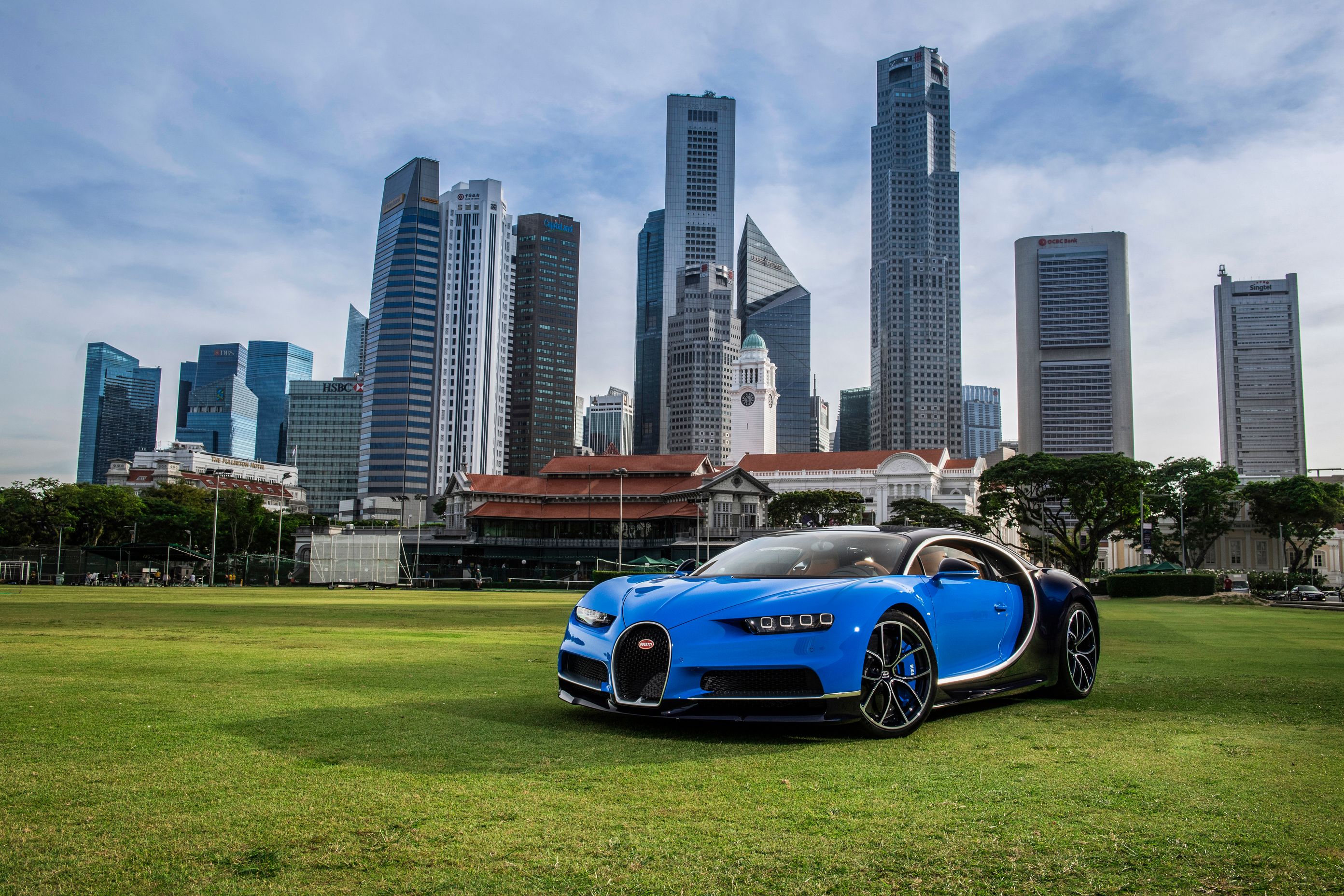 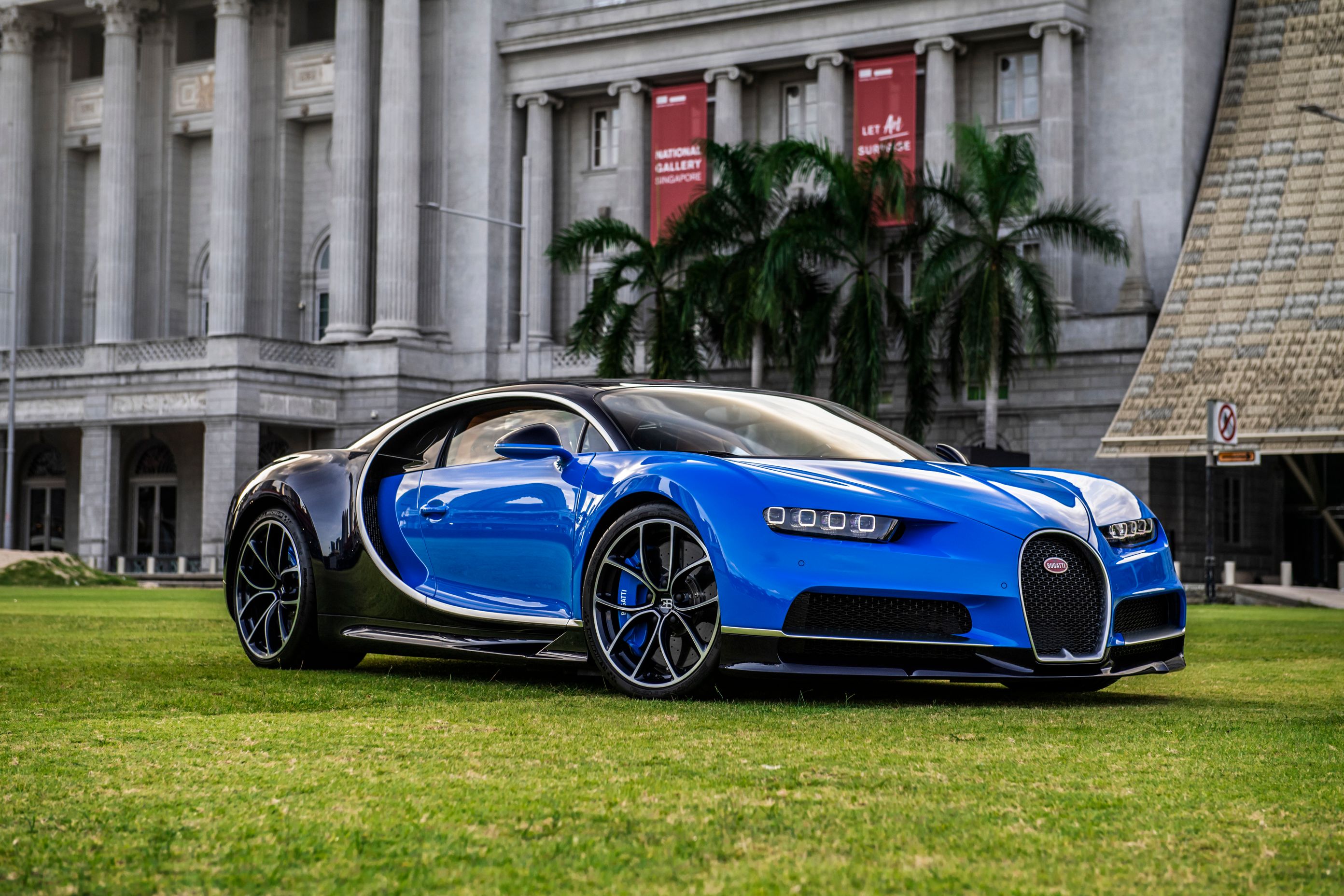 What makes the Chiron special, besides its 2.5 million euro price tag (not including taxes and options)? According to Bugatti’s official figures, the Chiron is able to do a jaw-dropping 420kmh, or 261mph. How does it go so fast? Raw power. The new Chiron has a whopping 1479bhp coursing through its veins, an incredible amount of horsepower almost inconceivable in a luxury motorcar. In comparison, the highest horsepower rating for a thoroughbred F1 race car comes in only at around a paltry 949bhp. The Chiron adds more than 500bhp to that figure. However, it’s unlikely that you’ll ever see the Chiron pass you up on the expressway at 400kph because at those speeds, besides being illegal, the tires would explode from the friction. 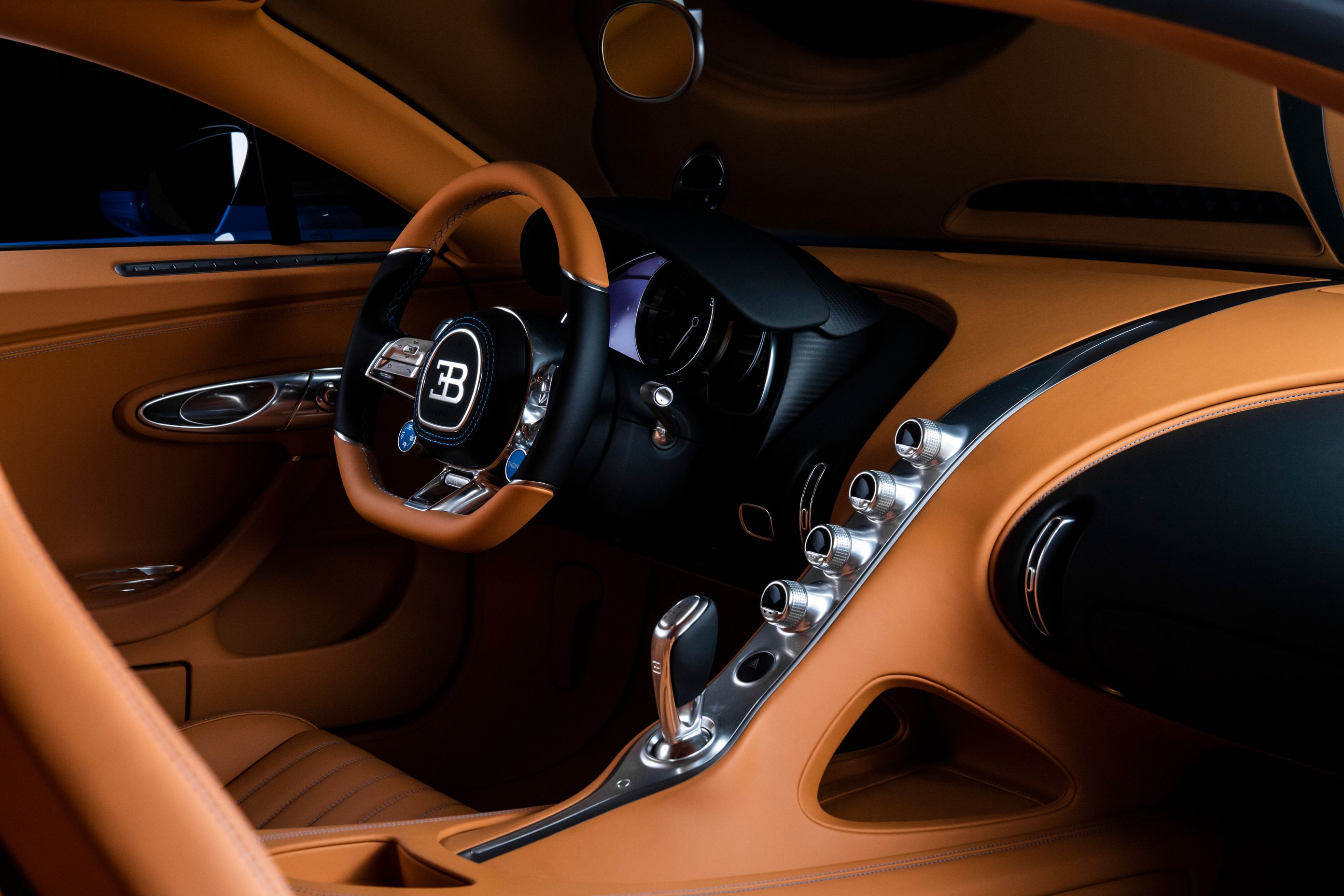 “We recognize a growing appetite for hypercars in Asia. Our customers form an exclusive group of automobile collectors in search of the very best,” says Mr. Victor Kwan, Managing Director of the Prestige Division of Wearnes Automotive. “Besides enjoying the exclusivity and power of the Bugatti, customers also consider its investment value. The Bugatti Chiron is one of the few cars that actually appreciates in value.” Since the launch of the Bugatti Chiron in 2016, the Singapore-based automotive dealer has sold 20 units of the sports car, with ten cars sold in 2018 alone.

Legend in the Making

Italian-born Ettore Bugatti founded Bugatti in 1909 in Molsheim, France. The company was known for its excellent engineering and, perhaps more importantly, the artistic manner in which the cars were produced. Ettore’s father, Carlo, was an important art nouveau furniture and jewelry designer and that helped add a bit of flair to Bugatti’s designs.

Corsica Coachworks, a small coach building business founded in 1920 just after World War I, produced many of Bugatti’s bodies. They were builders of true bespoke car bodies, often in aluminum, a revolutionary material of the time. Almost every Corsica body was unique and the Bugatti editions were no exception.

When Ettore died in 1947, it effectively killed of the brand. He did have a son, Jean, but he died in 1939 in a race car accident. Jean’s death meant there was no successor to the car company. In all, no more than about 8,000 cars were ever made.

As a car manufacturer, Bugatti enjoyed great success in the early days of Grand Prix motor racing. In 1929, a Bugatti won the first ever Monaco Grand Prix. Racing success peaked with driver Jean-Pierre Wimille winning the 24 Hours of Le Mans twice, in 1937 and 1939. Due to their elegant, thoughtful engineering and modernistic designs, Bugatti cars were seen as the ultimate race cars at the time. The Bugatti Type 10 took the top four positions at its first race. The 1924 Bugatti Type 35 is one of the most successful racing cars ever built. Bugattis swept to victory in the Targa Florio for five years straight, from 1925 through 1929. The legendary Louis Chiron won the most races in Bugatti race cars.

At the end of World War II the Molsheim factory was left in ruins. After the war, Bugatti designed and planned to build a series of new cars, including the Type 73 road car and Type 73C single seat-racing car, but Bugatti only managed to build five Type 73 cars.

The hallmark of a Bugatti was its quality and design. While the exterior received special attention, so did the insides of the car. Engine blocks were scraped by hand to ensure the surfaces were so flat that gaskets were not required for sealing. Engine compartments had guilloché finishes on them, while safety wires had been wrapped in intricately laced patterns. Even when it came to the suspension, Bugatti did it differently. Most manufacturers bolted springs to the axles, but Bugatti's axles were forged in such a way that the spring passed through an opening in the axle, a much more elegant solution that required fewer parts. Bugatti once exclaimed that his nearest competitor, Bentley, made what he coined, "the world's fastest lorries,” a snub to the Bentley’s overbuilt construction. According to Bugatti, "weight was the enemy."

After sort of dying in the early ’50s, Bugatti got a second chance when Italian entrepreneur Romano Artioli revived the Bugatti brand in 1987. Artioli established Bugatti Automobili S.p.A. and moved the factory to Campogalliano, Modena, Italy.

In 1993, through his holding company, ACBN Holdings S.A. of Luxembourg, Romano Artioli purchased Lotus Cars from General Motors. Plans were made to list Bugatti shares on international stock exchanges. Then the unimaginable happened. Recession hit the world economy and car sales plummeted. Bugatti wasn’t spared and filed for bankruptcy.

Bugatti's liquidators sold Lotus Cars to Proton of Malaysia. Finally, Volkswagen Group acquired the Bugatti brand in 1998 and remain the owners to this day. The arrival of the Chiron in Singapore is a testament to the Bugatti brand and its longevity and determination to remain in top position as an automotive icon.