The Rolls-Royce Phantom made its first debut way back in 1925 and even then it was a marvel. Today, Rolls-Royce’s new Phantom still represents the ultimate in luxury handcrafted motorcars. Still, looking at it from the outside, it can appear rather imposing and daunting, but when you sit down in the driver’s seat the experience is nothing short of miraculous.

The car’s opulent, bold design is created from an aluminum coachwork that rides on computer-controlled air suspension for unsurpassed comfort. The all-new aluminum — what Rolls-Royce calls “Architecture of Luxury” — foundation of the Phantom delivers a whole new level of comfort because it is lighter, quieter, stiffer and more technologically advanced than previous Phantom chassis.

In many ways the Phantom has remained unchallenged at the top of the super luxury vehicle class, combining matchless extravagance and majesty with the utmost in comfort and refinement, remarkable handling and incredible sense of presence. What’s more, if you want to demonstrate to the world you've arrived, then there’s nothing better to advertise it than showing up in a Phantom.

Top of the Line You’ve got to remember that this car is tailored to impress royalty, not to mention a whole slew of millionaires and billionaires. And impressive it is. In this latest incarnation of the Phantom, Rolls-Royce even offers the ability to create a custom dashboard that can be festooned with original artwork. Rolls-Royce terms this dashboard space “The Gallery.”

As a result, owners will be able to commission a truly individual work of art that spans the width of The Gallery in their new Phantom. Placed next to The Gallery dashboard space is the new LCD speedometer and control panel, which incorporates a heads-up display. Rolls-Royce did bow to previous convention and installed a mechanical clock on the dashboard as in other Phantoms.

Looking inside, the car’s interior seems to be made up from a forest of flawless wood veneer, a herd of supple cow hides (that seems to cover everything) along with accents of gleaming glass and polished metal. Unlike other luxury marques, it seems that the designers at Rolls-Royce take a dim view of fake plated plastic to adorn their interiors.

The Phantom comes in both a standard (5770mm) and long wheelbase versions, with the latter being nearly 22cm longer. That extra length goes into making up additional rear-seat legroom, as if it needed any more. 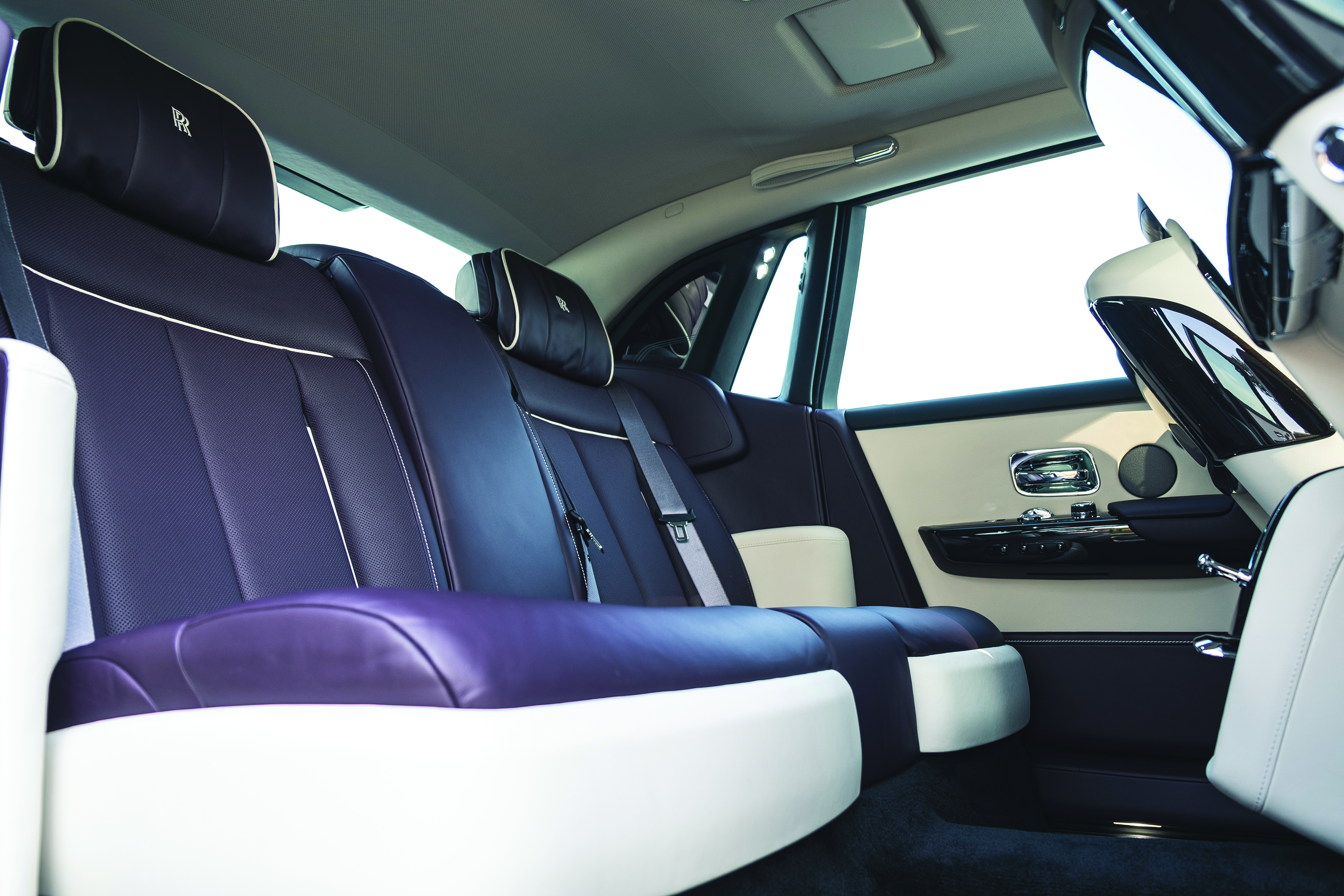 Harkening to a bygone era, Rolls-Royce still offers rear coach doors (doors that have their hinge in the rear). These doors allow graceful comings and goings from the rear seat as your legs swivel out first.

And yes, all doors open and close with the push of a button, naturally. Each door also has a hidden umbrella holder built into each door cavity.

Inside this slightly more than 2,500kg behemoth is a mind-boggling range of standard and optional luxuries, such as power-adjustable seats with massage, the third rear fold down seat, a refrigerated console compartment, and even remote controls for the car's infotainment system. You may also customize any part of the interior to your heart’s content.

Rolls-Royce will also match any color leather you can imagine. In the driver’s seat, the carmaker offers basic driver-assistance features such as lane-departure and forward collision warning as standard. The whole idea is understated elegance, not a show of technical wizardry often found in other luxury vehicles.

To drive this beast of a car, a 563-hp twin-turbo V-12 is paired with an eight-speed automatic and rear-wheel drive. Rolls-Royce revealed that this engine is not shared with any other vehicle found in the BMW automotive group (BMW owns the Rolls-Royce brand). According to the company, they believe in the traditional rear-wheel approach for propelling the sedan down the highway, not that fancy four-wheel stuff.

Putting your foot down on the accelerator instantly results in a team of horse being unbridled. Power isn’t a problem in this car.

Still, it’s scary to imagine what it must be like if you test Rolls-Royce's reported 5.3-second zero-to-100kmh. There are laws of physics and even the Phantom has to follow them. This motorcar is better suited for gliding, cloud-like along with graceful throttle and steering inputs. To report that the ride is comfortable and smooth would be an understatement. And to create such a smooth ride, the car incorporates a pothole, ripple-spotting laser camera that helps the suspension adjust to road imperfections as they happen.

The Phantom also has an all-new suspension (double-wishbone front, five-link rear) that sits below the air springs and adaptive dampers. The Phantom also uses four-wheel steering technology and active anti-roll bars to make turns and cornering a worry-free activity, which is reassuring in such a big automobile.

It is surprisingly nimble for such a large automobile. The Phantom practically glides over the road like a magic carpet from “One Thousand and One Nights.”

Sadly, Aladdin’s carpet didn’t have double glazing to block out sound and heat like the Phantom does. The interior of this car is so silent you could hear a pin drop if there weren’t so much plush carpeting and leather to cushion its fall. In fact, the vibration-deadening measures are installed in ways you won’t find in any other production car, starting from the tires and moving on upward through the chassis. 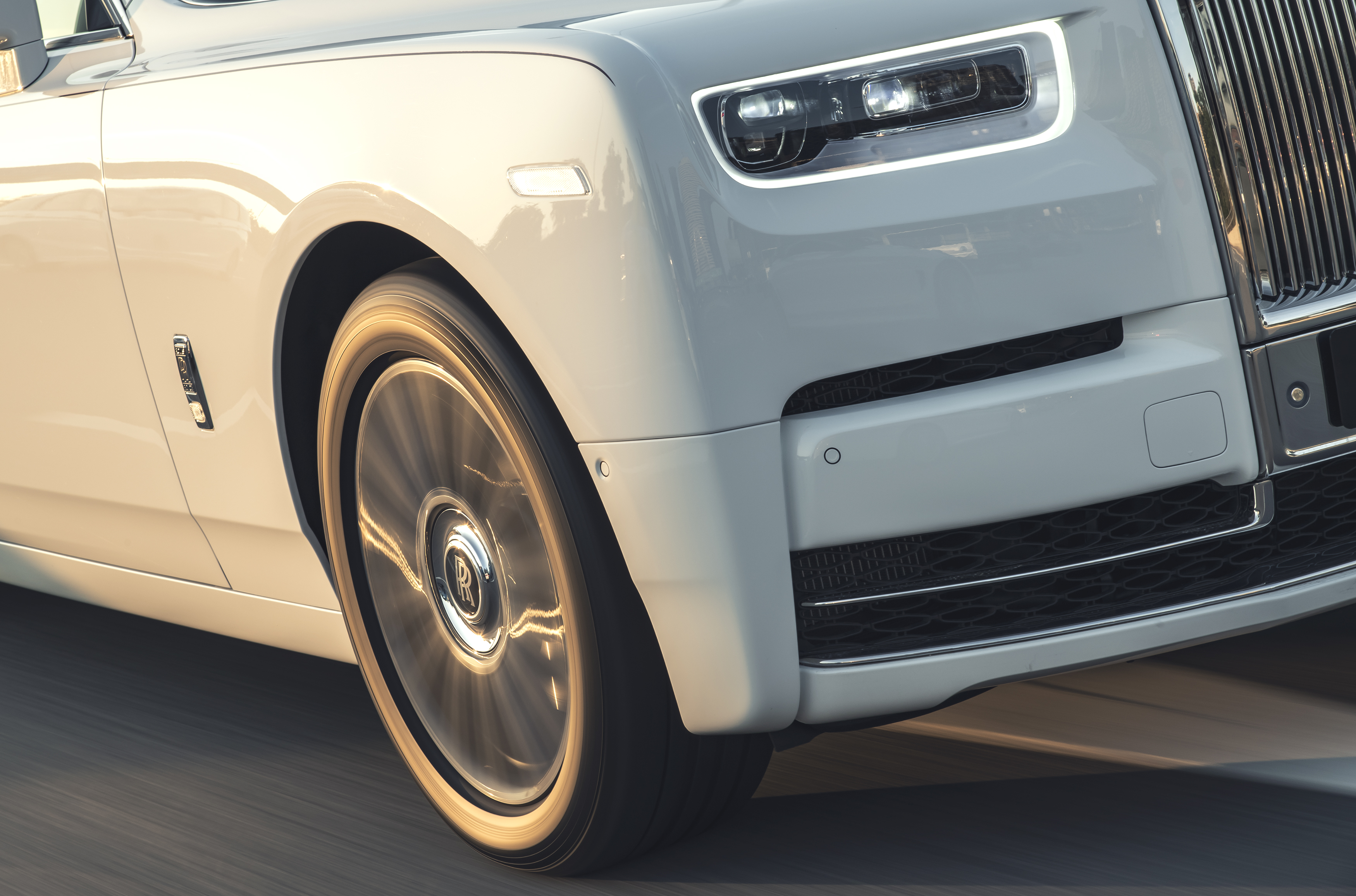 For the 2019 version of the Phantom, director of design Giles Taylor created a car that was slightly less formal. The exterior is also somewhat more modern and more softened than that of the previous Phantom.

Even the celebrated “Pantheon” radiator grille of Phantoms past has been toned down so as to sit within the surrounding bodywork instead of sitting proud above it. Rest assured the big chrome grille is still one of the Phantom’s most prominent features. Despite advances made by other manufacturers like Audi’s latest A8 (reviewed in last month’s issue) and Mercedes full-sized executive cars and even the doppelgänger Bentley Mulsanne, the Phantom surpasses these cars in nearly every aspect. The Phantom has superior ride comfort, mechanical refinement, a well isolated cabin, an excess of space, lavish richness and a cloud-like driving experience.

The Phantom parades its grandness along with a very real sense of presence that is far in advance of anything rolling on asphalt today. A basic version, if there is such a thing, of the Phantom will set you back nearly S$1.8 million. However, the car we tested had a few extra bells and whistles that hiked that price to around a cool S$2.2 million. Is the car worth the hefty price tag? In a word, yes, because it’s simply one of the finest luxury vehicles built today.