This Rolls-Royce Car is Perfect in its Simplicity

When I was a young lad, my father, who was a rocket mechanic, used to work on our family cars in his spare time. He enjoyed this very much and I would help him. One day, after seeing a rather splashy, black Cadillac Fleetwood Brougham drive by, I asked my father what made that car so different from our rather sedate station wagon? He replied, “Boy, all cars are the same, they just look a bit different on the outside. They all have four wheels, an engine and get from point A to B.” 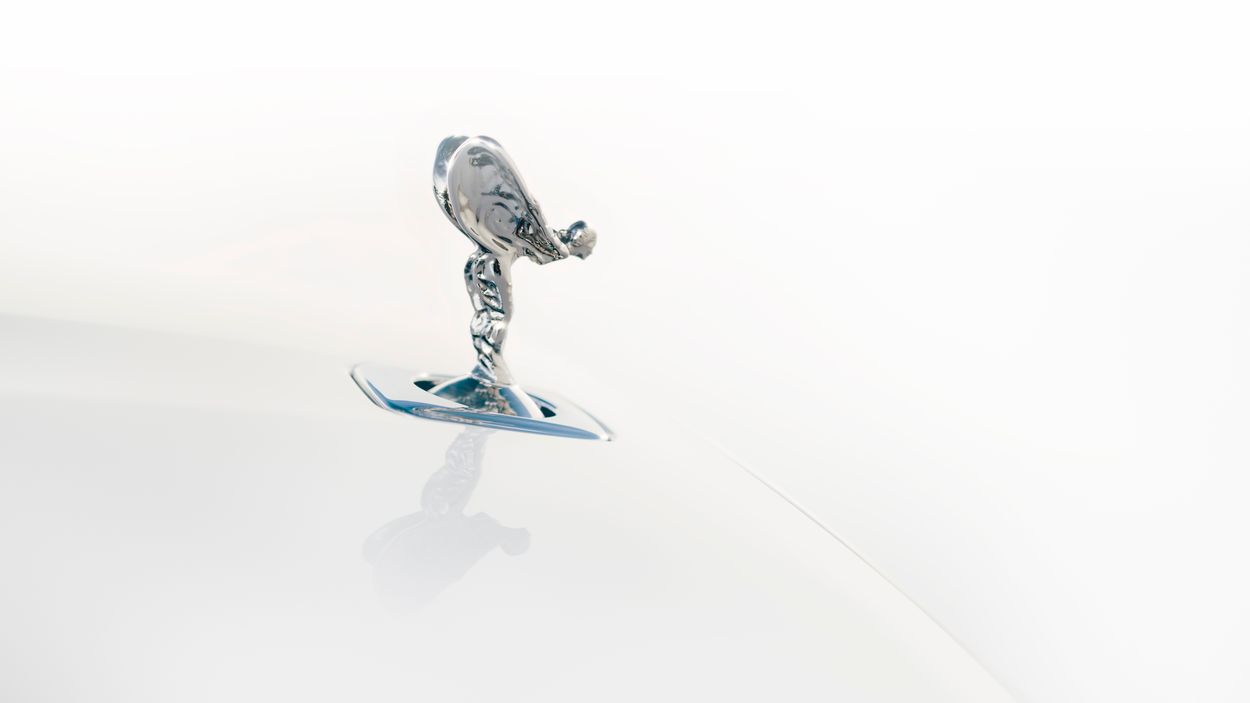 I suppose that answer rang true with me for many years, but then my father never had been in a Rolls-Royce. The luxury marquee is something special to behold and experience, indeed. It takes car ownership to another level. Recently, the company has upped its game even more by introducing what can only be termed the pinnacle of motoring technology: The Rolls-Royce Ghost Extended.

Apparently, the only component carried over from the first Goodwood-era Ghost was the chrome plated Spirit of Ecstasy statue that emerges triumphantly from the bonnet when the ignition is switched on. According to CEO Torsten Muller-Otvos, “Everything else was designed, crafted and engineered from the ground up. The result is the most technologically advanced Rolls-Royce yet. It distils the pillars of our brand into a beautiful, minimalist, yet highly complex product that is perfectly in harmony with our Ghost clients’ needs.”

The new Ghost is a car that is to be driven as much as it is to be driven around in by a chauffeur. As a driver, the car is a joy to drive. As a passenger, you’re experiencing nothing less that total luxury and comfort. Then, there’s the way it looks — an evolved aesthetic that’s very restrained. The luxury carmaker calls the Ghost’s new design as “post-opulent,” and “limited, intelligent, and unobtrusive.” In many ways, it is classic Rolls-Royce understatement, a rejection of everything that’s crass and “bling-like.” The car is an oasis of luxury and hi-tech brilliance. The car has a commanding presence. 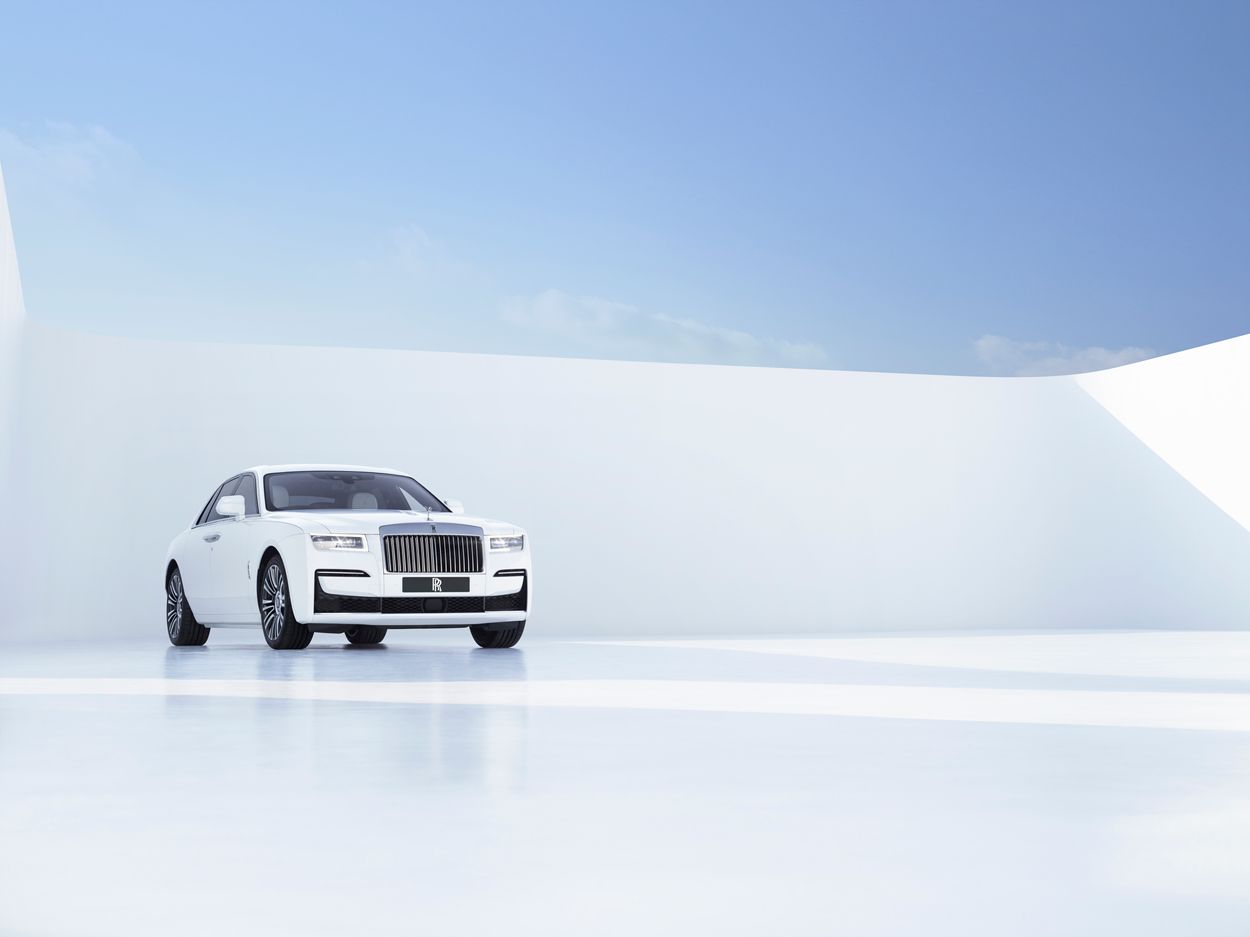 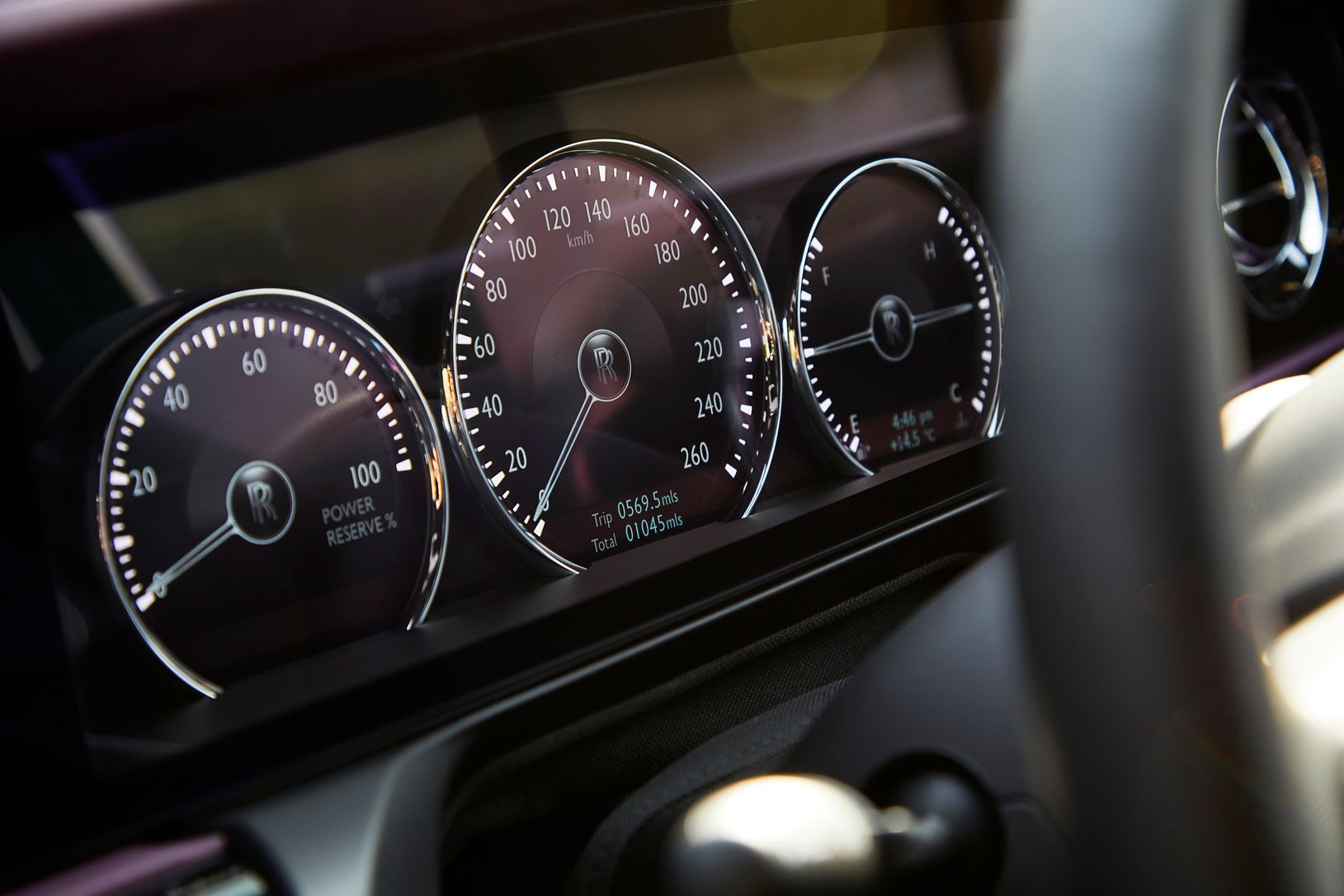 At Rolls-Royce, less is more. The company has discovered through research that Ghost buyers don’t like dashboards jammed with a million buttons, menus, and clutter. It seems to be a simple truth: The more expensive a car is, the less it has to show off.  While the dashboard is simple, the vehicle’s guts aren’t. The Ghost has plenty power, with an impressive 6.75-litre twin-turbo V12 (563bhp and 627ft lb of torque – all of which are available from just 1,600rpm).

The interior of the car looks like an opulent, comfortable gentlemen’s club with its oiled hardwoods, polished metal accents, and acres of supple leather. And once inside this luxury clubroom, you might think that you’re seeing stars. In all actuality you are; the dark headliner in the Ghost is infused with fiber optic points of light that simulate the heavens at night. If you look long enough, you’ll spy a random shooting star that crosses the faux Rolls-Royce sky, from time to time.

To move this refined beast along, Rolls takes advantage of its proprietary aluminum spaceframe, which is also used on the Rolls-Royce Cullinan SUV. The new Ghost is 30mm wider than the previous car, which creates a better stance. The luxury car is 5546mm long and 2148mm wide and occupies a lot of road space. The car weighs a very hefty 2,490kg. The Ghost’s hand-welded aluminum structure means that its body has a seamless flow to it, interrupted only by panels of glass and the Parthenon-like grill. 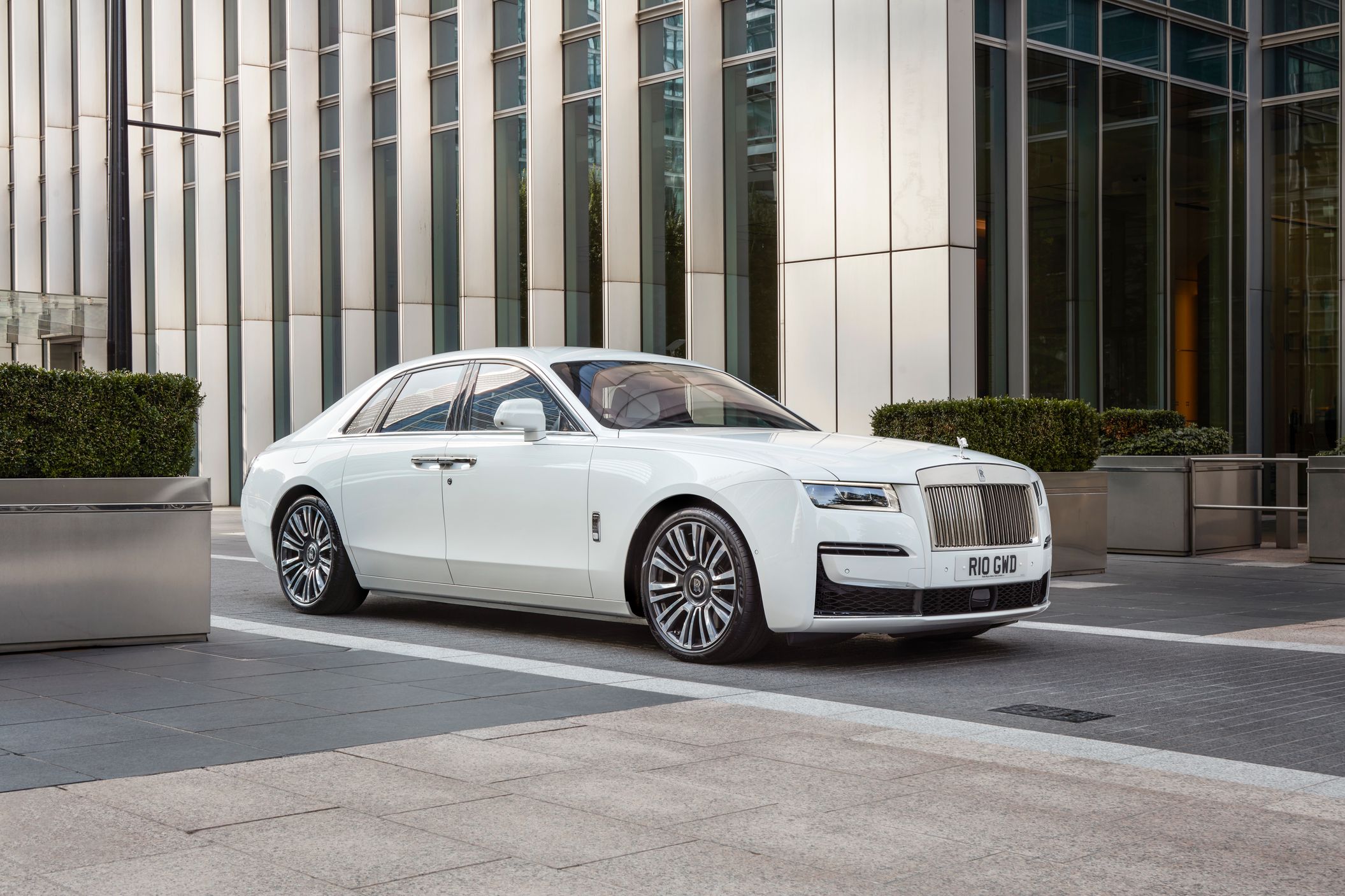 What’s underneath the Ghost’s superstructure is also impressive. The car now incorporates all-wheel drivetrain, all-wheel steering, and a completely redesigned Planar Suspension System, which further enhance the marquee’s legendary “Magic Carpet Ride.” The new Ghost doesn’t just float on the road; it seems to effortlessly iron out bumps as it drives. This is accomplished by the suspension software and the stereo camera system integrated in the windscreen to see the road ahead, adjusting suspension proactively rather than reactively. Rolls-Royce also equipped the Ghost with a Satellite Aided Transmission system, which draws on GPS data to pre-select the optimum gear for upcoming corners.

The rear doors of this luxury vehicle are also special. In America, we used to call these doors suicide doors because the hinge is set on the left, not the right. Rolls-Royce prefers the more aristocratic description, “coach doors.” Whatever they are called, entering the rear of the car is a joy as there are no obstacles to block the seat. What’s more, the doors open and close all by themselves when a button is pushed or when you pull on the handle twice.

The vehicle will also have you breathing easier because it comes equipped with a new Micro-Environment Purification System (MEPS). The system uses software and highly sensitive Impurity Detection Sensors to sample ambient air quality, automatically switching fresh air-intakes to recirculation mode if unacceptable levels of airborne contaminants are discovered. This channels all cabin air through a nanofleece filter, which is capable of removing nearly all ultra-fine particles throughout the cabin. 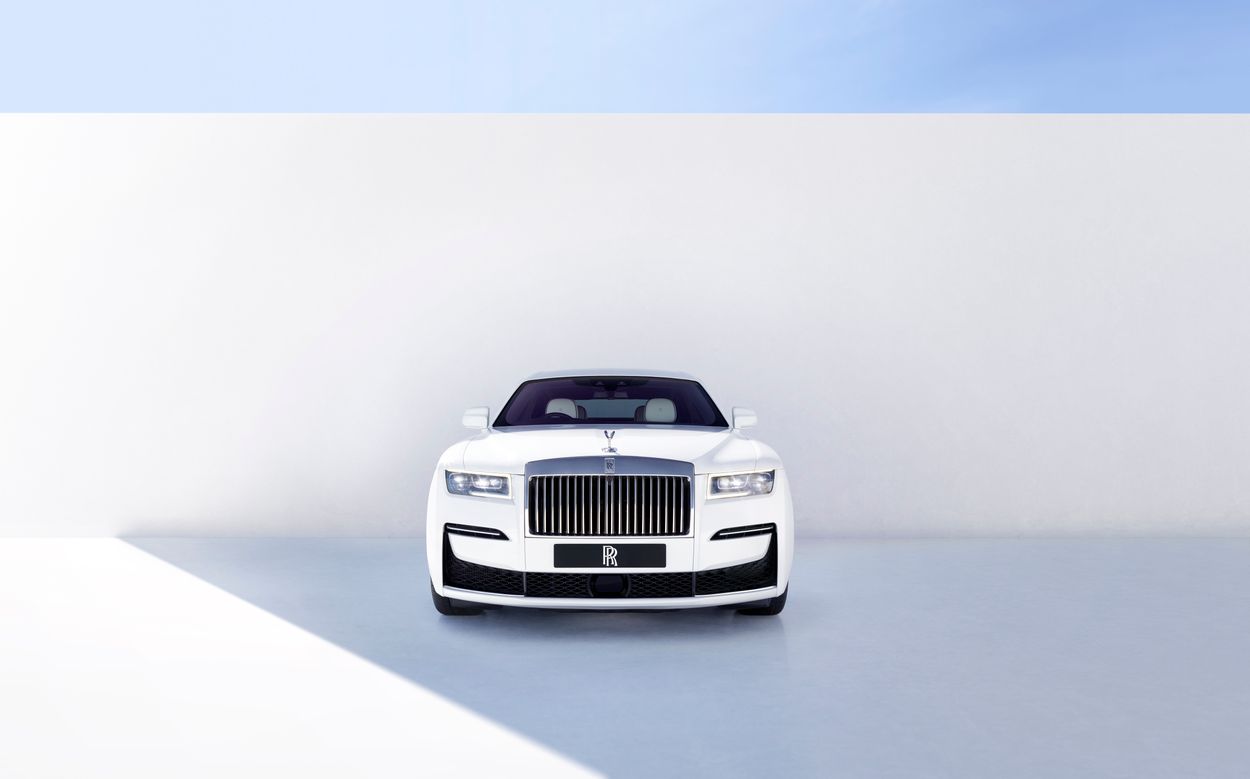 Besides having a pristine, enormous, and comfortable interior, the acoustics of this car are breathtaking. What makes this vehicle so quiet is accomplished by a number of components. First, the Rolls-Royce spaceframe aluminum architecture has higher acoustic impedance compared to steel. Additionally, the interior is constructed from complex forms, rather than flat, resonant surfaces. Both the bulkhead and floor sections are also double-skinned, sandwiching composite damping felts to reduce road noise. The windows are even double glassed to reduce sound transmission. The car was so silent that it caused people anxiety. As a result, Rolls acoustic engineers introduced what they term a “whisper” into the car, a sort of white noise that helps calm nerves. The exact form, frequency, and specifications of this whisper is a closely guarded secret.

The Rolls-Royce Ghost Extended is the pinnacle of automotive luxury, ride, comfort, and technology. It defines what a luxury car can and should be. If you would like to add the Ghost to your stable of motorcars it will set you back a tidy sum.  The base version of the new Ghost starts at a cool S$1.3 million, although that’s just an estimate as Rolls-Royce makes bespoke cars that can accommodate just about any request.  In the end, I’m just sorry that my father was never able to drive in a Rolls-Royce. It would have certainly changed his mind about all cars being the same.

This Rolls-royce Car Is Perfect In Its Simplicity