I’m not normally inspired by quotes on water bottles, but this one in Croatia caught my eye, “Nowhere can man find a quieter or more untroubled retreat than in his own soul.” Thanks Roman Emperor Marcus Aurelius, but I would have to say Croatia is my untroubled retreat.

My wife and I try and get to Croatia every year. There’s something about it. Apart from the fabulous people (slight disclaimer: I love the people so much, I married one), the outrageous scenery, amazing food, the heritage and culture, it’s the afore-mentioned water. I have been lucky enough to swim in many seas and oceans across the planet, and the water off Croatia is the clearest and cleanest I have seen. That’s my retreat.

The heart of Croatia’s Dalmatian coast, Split was originally inhabited as a Greek colony, fast forward slightly and the Roman emperor Diocletian built his retirement palace here in around 305 AD. Good choice. The ancient fortress has become the old town of present day Split – the palace and remains of its parts, and the magnificent Cathedral of St. Domnius still stand. It’s amazing to wander through Diocletian’s Palace by day and especially by night. It is quite rightly a UNESCO World Heritage site.

The social hub of Split is the Riva – the palm-lined waterfront promenade. Locals emerge early in the morning to meet in the cafés, and to stock up at the nearby fish and fresh food markets, the tourists surface later, filling the restaurants and bars, ambling through the narrow lanes off the Riva through the old town, exploring the boutiques, galleries, cafes, markets and restaurants. We stayed at the Splendida Palace, a family villa converted into 10 guestrooms in a very quiet residential area about ten minutes walk to Diocletian’s Palace. We also stayed at Le Méridien Lav, Split which is around 8km from the old town. There are stunning views form the rooms and suites, two beaches – including a private beach with cabanas and wonderful service, and a choice of restaurants stretching along the marina. The spa is excellent, and a shuttle bus takes you into the old town.

The highlight of our trip was undoubtedly an all day private luxury sailing trip from Split on a magnificent 57-foot Beneteau, organized through Toto Tours. Watching Split harbour slowly disappear behind us as we headed out, mooring in secluded coves to swim off the yacht, diving into that stunning azure crystal water, relaxing on the deck with champagne. We stopped at Šolta Island for lunch at a seafood restaurant with fabulous views – water so clear, the boats looked like they were floating on air. You get a lot of that in Croatia. We were under sail for a while when the wind cooperated as we cruised back to Split. Magical. The speedboat to the island of Hvar from Split wasn’t quite as leisurely and luxurious as the yacht, but enjoyable nonetheless. Hvar often appears on ‘best islands of the world lists’, and no wonder. Arriving in Hvar Town’s harbor, the juxtaposition of modern and ancient is instantly apparent: Salty, sea-worn fishing boats, bobbing gently next to ostentatious multi-million dollar super yachts.

The town’s focal point, St. Stjepan’s Square unfolds in front of you, with the polished white marble glistening in the sun, echoing the clattering of suitcase wheels, fringed by cafes and restaurants and 13th century buildings, with the Renaissance Theater (built in 1612) and the Cathedral of St. Stjepan keeping a watchful eye over the square. High on the hill above the harbor, the fort Španjola keeps a watchful eye on everything. 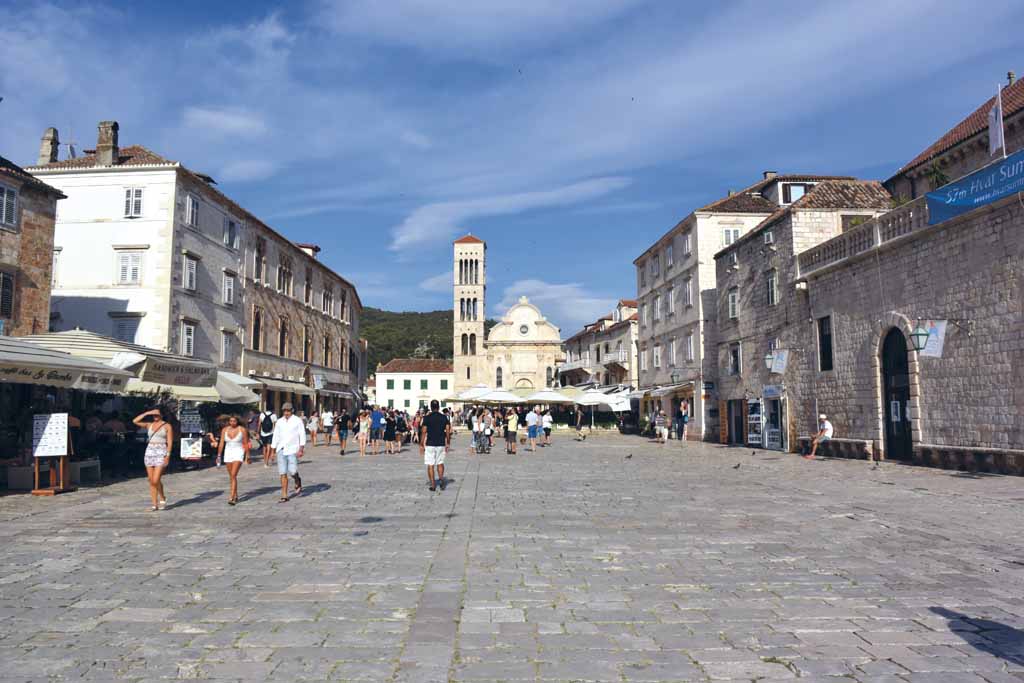 For many years, Hvar has had a reputation as a ‘party town’ but thankfully that is changing. Hotel Adriana has a prime waterfront position overlooking the harbour, away from the bars, and we enjoyed a very pleasant lunch and our breakfasts at the restaurant watching the world go by, on land and water. The rooms are very spacious with great views.

There are many dining options around the square in Hvar and the harbor, but we had a truly authentic Croatian experience at Lungo Mare, a small, family-run restaurant about 15 minutes walk from the main square. It was mainly locals dining on the Dalmatian delicacies that night.

We spent two of our days in Hvar chilling out at the wonderful Bonj les Bains luxury beach club. A colonnade dating back to 1927, featuring gleaming white stone balustrades, it is one of Hvar’s most iconic buildings and has a retro-luxury feel. Converted into an exclusive beach club over a decade ago, you can choose from private stone cabanas where you can enjoy a massage, sunbeds, and private pontoons – the obvious choice for us. Basically our days were spent luxuriating on the canopy-covered day bed, gazing at and swimming in the Adriatic, cocktails, Champagne, lunch in the fabulous restaurant, repeat. 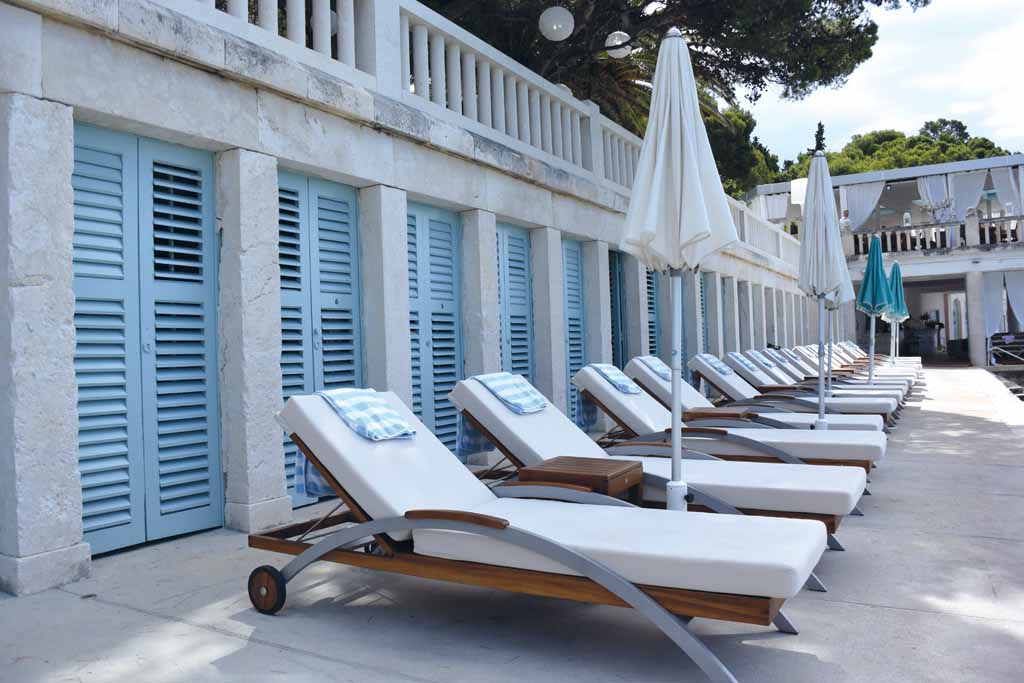 During our stay on Hvar we spent all of our time in Hvar Town. We would love to return and explore Stari Grad (old town) one of Croatia’s most historic towns, the vineyards and spectacular lavender fields, and hidden beaches.

Opposite Hvar, though not quite swimming distance, is the island of Brač. Although they are close, they have a very different feel. We stayed in the small town of Bol on the south of the island, which doesn’t appear on as many travel itineraries, and is much more laid back than Hvar. The place is stunning, just like everywhere in Croatia. You do get slightly blasé after a while.

Bol is set around the marina, old stone houses stretch along the waterfront, with winding lanes heading up the hills, vibrant bougainvillea clinging to the stone villas. There are two beaches framed by the imposing Dominican monastery, just a few minutes walk to the east. Walking to the beaches, we enjoyed one of the best meals of our Croatia trip. The restaurant Ribarska Kućica is set in a quaint little stone house, with a terrace affording incredible views over the beach and monastery. The seafood is amazing. We also had a couple of excellent meals on the terrace at Taverna Riva in the centre of the town. We stayed at the boutique Hotel Bol, about a ten-minute walk up the hill from the town, next to an olive grove. It is a small hotel with a nice atmosphere, great service, and a shuttle service to Brač’s rockstar attraction Zlatni Rat beach.

Also known as the Golden Horn, the V-shaped beach extends half a kilometer into the Adriatic, and is one of the most iconic in the world. We spent a few days relaxing on the beach, enjoying lunch at the restaurant and watching the aerobatic windsurfers.

Like Hvar, we only scratched the surface of Brač, there is much more to discover on our next trip to Croatia, which we have just booked as we speak. The Adriatic is calling…