Bazil Khalaf, 16, joined The Little Arts Academy (LAA) 2013 while he was attending Woodlands Primary School. “My parents decided to enroll me as I was really searching for something to do; so, we went down to LAA, which was then at POMO in Dhoby Ghaut. I spent months trying out different art forms and ultimately chose dance. Bazil has been performing for at least six of the eight years he’s spent with LAA and 10 Square Youth. His followers keep track of his progress on Instagram at @_nobouff_.

“I was only seven when I joined LAA, but I was already searching for something meaningful to do, something that I was passionate about. Meanwhile, my parents wanted me to learn skills that I can develop. They enrolled me in silat lessons, a traditional Malay martial art, at the nearby community centre, but I eventually found that my talent and interest lay in the arts.”

At LAA, Bazil had many opportunities to perform in 10 Square Youth productions. He also had his acting debut at a 10 Square Youth year-end production in 2018 while still a student in LAA. “Over the years, I’ve been able to hone my talents, learn new skills, and make many friends. The training centre has been a big part of my life. It has given me many opportunities to showcase my talent in dance and theatre through local and overseas performances.”

After graduation, Bazil plans to return as an LAA alumni to help train younger talents through classes and performances. “I want to pursue a career in dance, but I’m also considering furthering my studies in higher institutions as I keep my passion for the arts alive.” 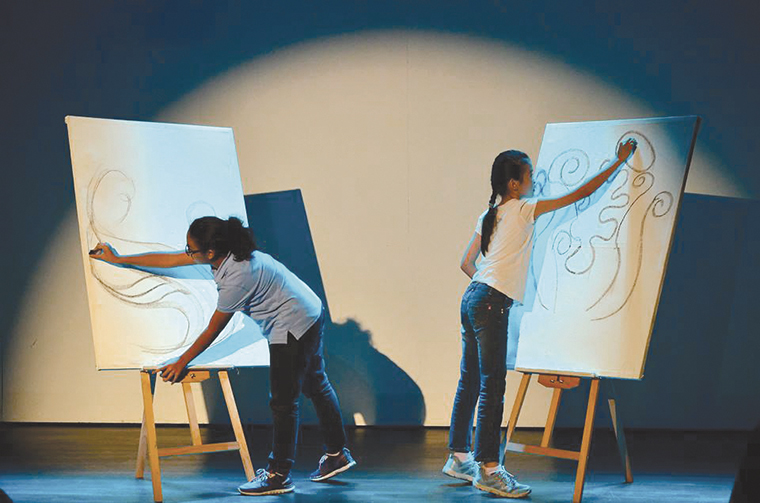 “I did not have a direction as an artist; I doodled aimlessly but I never stepped out of my comfort zone or expanded my abilities as an artist,” admits 15-year-old artist by the name of vuloxii. “I never had enough money for art supplies, and it frustrated me that I was stuck with pencil and paper.”

In primary school, vuloxii heard about BT BAF and how it helps young talents from financially disadvantaged backgrounds. She joined the LAA program for basic art lessons and followed it up with the 10 Square Youth program which provides exposure to different types of art and creation. This is her third year as a BT BAF beneficiary.

“The teachers at LAA and 10 Square Youth guided me through my journey and taught me techniques that have significantly improved my work,” she says. “They are easy to talk to; I didn’t have difficulty voicing my opinion or asking questions. They are also great artists who helped me develop my ideas and push me in the right direction.”

Vuloxii intends to pursue animation after she graduates from 10 Square Youth. “Animation may seem difficult, but it is rewarding in the end. I love how artists create something and bring it to life with animation. Being able to manipulate my creation gives me a sense of excitement and enthusiasm no matter how difficult it might be. I want to be able to hone my skills when I graduate from 10 Square Youth and use them to help me in my journey.”

“My dad heard about the programs offere at LAA for children between the ages of 6 and 12 who were interested in the arts, and signed me up together with my siblings. After about six years, I graduated from LAA and decided to continue with performing arts in 10 Square Youth. I’ve been with the program for seven years,” says 18-year-old Shermaine Ng Qian Rui.

Before she joined LAA, Shermaine’s life was divided between school and home on weekdays, and outdoor activities with her family on weekends. But she has always nurtured a passion for dance. BT BAF gave her an opportunity to join the youth program and pursue her interest.

Today, she spends about 70 per cent of her weekdays dancing. In fact, she recently joined two dance CCAs in her school. “LAA and 10 Square Youth gave me the opportunity to perform and compete in various events such as the Super24 and Pulse dance competitions. I’ve also been a part of ChildAid shows in Singapore, Jakarta, and Kuala Lumpur. These experiences have made me more confident, patient, and open to others. I’ve also made many friends from different countries and have been able to travel out of Singapore.” Both Shermaine and her sister were later put into the Stylo Mylo dance crew and had performed for a Maritime Singapore event.

After graduating from 10 Square Youth, Shermaine would like to sign up for dance classes and join other dance crews. “I want to compete. Apart from that, I’m looking forward to achieving my dream to be an architect or an interior designer. Hopefully, LAA will still be around when I have my own kids. I would want them to experience the fun that I had with LAA and 10 Square Youth. And who knows, maybe I’ll have a family of dancers or performing artists!” “Back in Primary 2, my form teacher told me to go for this program because I loved to draw so much. I ended up joining LAA, and later on 10 Square Youth, because I wanted to learn more about the visual arts,” recalls Melati Binte Jahari, 18. “Eventually, I continued attending because of the meaningful connections I made with the people I met through the program.” This year marks Melati’s 10th year as a BT BAF beneficiary.

Although she is generally reserved and quiet, Melati found the courage to communicate with people through the program. “I’m no longer as anxious talking to people; (the programs) have also given me bountiful opportunities to explore the skills I wanted to learn, and gain experience that allowed me to grow as a person,” she says. The process of learning new skills and applying them have taught Melati to enjoy the journey while striving to reach her goals.

Melati loved watching animated films as a child. “I felt a connection between me and visual arts. I found joy in being able to express how I felt through a different medium. I’ve never been able to part from it ever since, no matter how many new and exciting things I have tried.”

Melati is excited to see where her skills and passion will take her when she graduates. “My dreams tend to be ever-changing, as dreams do over time, but they will always remain within the arts. If I had to choose one dream, it would be to create a visual novel one day.”

The cost of supporting a beneficiary per year (inclusive of training costs, the provision of art materials, use of facilities and all necessary technical and production costs for exhibitions and productions staged by beneficiaries) is estimated to be at SGD $2,000 per annum, according to TRCL.

As the country opens up further, BT BAF hopes that this fundraiser will enable them to reach out to another 100 more beneficiaries. The accepted donation method for this fundraiser is via PAYNOW which can be done via the QR code or UEN number below. All donations of $20 and above qualify for 2.5 times tax deduction.

Register for the fundraising dinner here. Start 2023 on a high note with ART SG, Southeast Asia’s largest ever art fair, bringing together over 150 leading art galleries from around the world.

A Better Life Through The Arts

A Better Life Through…