Walking into the Heart of Japan

Discovering the cultural treasures of Japan on foot.

As with most people, my idea of what Japan was like – prior to actually visiting – was made up of visions of Tokyo culled from pop culture. A sea of neon lights and signs, skyscrapers and out-of-this-world architecture, over-the-top fashion, and cutting-edge Japanese technology.

After several visits to Japan over the years, I’ve come to realize that while these pop culture-derived references actually do exist in Tokyo, it is far removed from what the rest of the country is actually like – particularly in areas overlooked by most tourists. Tokyo will have its luxury and capsule hotels, while more pastoral parts of Japan will have traditional ryokans that have been in the business of hospitality for centuries.

Where Tokyo boasts fine Japanese and international fare, restaurants in rural areas might heavily rely on a particular ingredient or type of food as the foundation of its entire menu. If automation is the norm in the capital, those living further afield might still be doing a lot of things by hand.

While Tokyo, as a holiday destination, is always in the collective consciousness of travellers, other areas might not. Sure there are the stars of the Kansai region, Osaka and Kyoto, or Hokkaido and Okinawa for seasonal escapes, but there are also undiscovered places further inland that offer a counterpoint to Tokyo’s frenetic energy.

Shining the spotlight on these equally interesting locales is Walk Japan, an independent organization known for specialty walking tours that open up off-the-beaten-path destinations to a wider audience. A selection of unique themed tours offer guests a deeper understanding of Japanese culture, whether on history, literature, and even gastronomy. One of Walk Japan’s most popular offerings is the walking tour of the Nakasendo Way, a grand 11-day adventure that takes people on a historical immersion through the highway that once connected ancient Kyoto to Tokyo. But for those who do not have the luxury of dedicating close to two weeks of their time, a fabulous alternative would be the Nakasendo Way: The Kiso Road tour, which is an abridged 5-day hike that highlights the mid-section – and perhaps, the most picturesque portion – of the famed Nakasendo highway, in the Nagano prefecture. My Kiso Road tour began in Nagoya where the entire group (a maximum of 12 participants) met. As the train pulled away from the station, the hour-long journey into the sleepy town of Ena began, signaled by the view from the window that turned greener and greener.

This starting point of the tour took us deeper into Japan’s mountainous area, which is home to Mt. Ontake and the Central Alps. It is also here where we got our first slice of traditional Japan by staying at an inn that has been run by the same family for 16 generations. 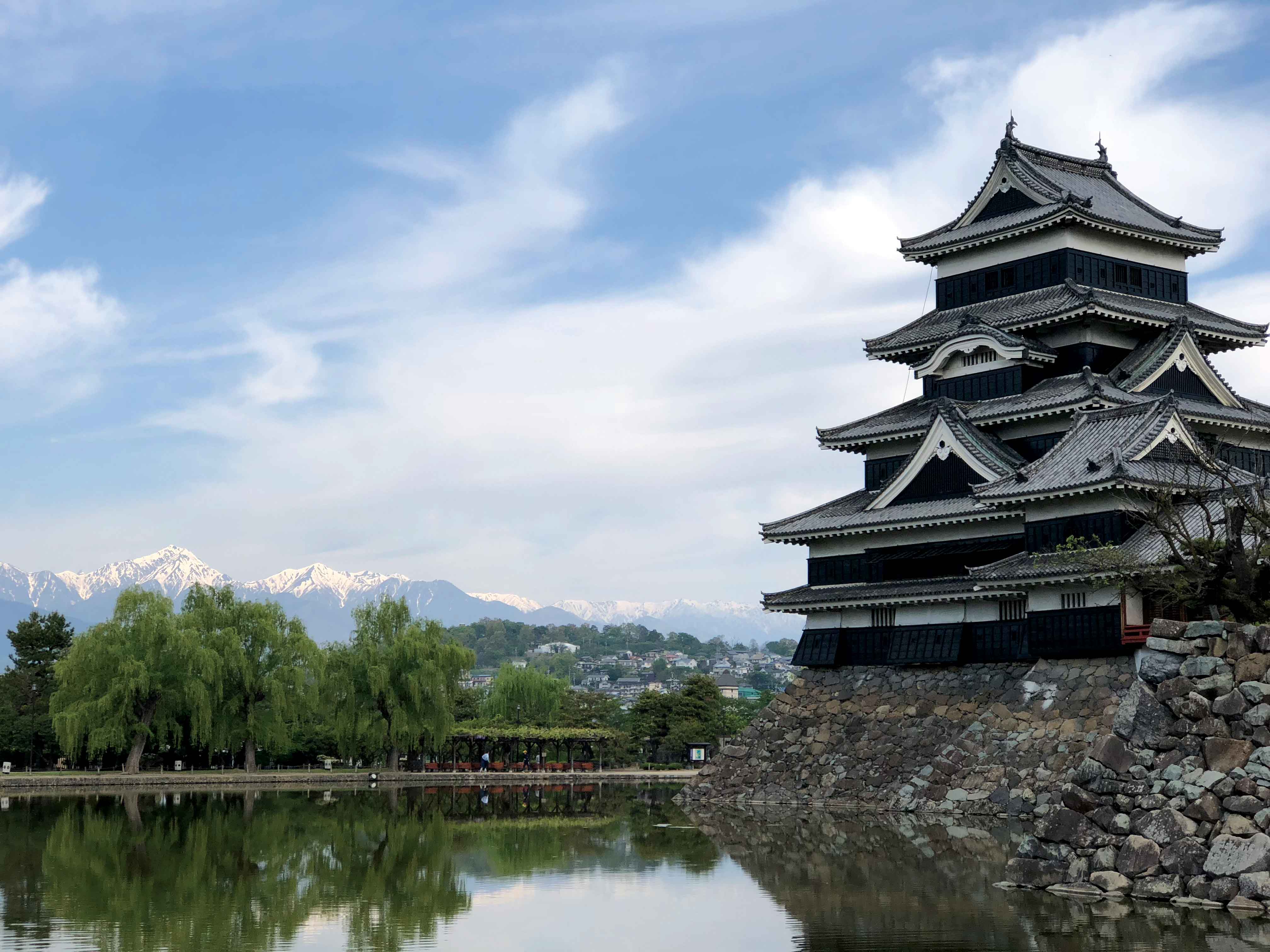 Matsumoto Castle and the Central Alps in the background

One of the few places of interest nearby is the Hishiya museum, which was a home once owned by the Furuya family. The museum has preserved the home’s machiya technique, all while highlighting key areas like the living rooms and the traditional garden in the back. You could also say that this wooden house played the role of a convenience store back then, as it sold daily essentials and offered postal and banking services as well. From Ena, my sprightly travel companions and I, along with our tour guide, Mr. Yo Murakami, made our way to Nakatsugawa station to take the train to Magome. This was followed by a taxi ride that brought us to the starting point of the day’s hike, marked by a narrow path that led us into the forest for a leisurely walk under the canopy of trees.

A few hours in, the landscape started to change and we ended up in Magome-juku, which saw more travelers stopping by to recharge at the cafes and restaurants or peruse the souvenir shops that sold regional specialties like chestnut-flavored sweets, wasabi, and pickled vegetables. Torii gate at a shrine near Magome

The next post town on our itinerary was Tsumago, which was perhaps the location that proved to be most challenging. The terrain here was slightly more difficult with its higher elevation and steeper pathways (Tip: This is the best time to bring out your trekking poles).

However, in terms of natural wonders, it was also the most rewarding. The group took some time to admire the majestic Karasawa-no taki waterfalls, pose for impromptu photo shoots, as well as take numerous photographs of Mt. Ontake’s jagged snow capped peaks in the distance. As for old world charm, Narai, the last post town on the hike, was the most impressive. The area, which is lined with wooden homes, shops, restaurants, and various establishments, is cradled between a mountainous range that evolves with the seasons. I can imagine it being set ablaze by shades of orange, yellow, and red in the fall; blanketed by pure white in the winter; and pulsating with lush shades of green in the spring and summer.

They also take their soba quite seriously in Narai, so we slurped on generous bowls of it after the hike, which proved to be the perfect pick-me-up the group needed before we were given free time to explore on our own and indulge in a bit of retail therapy. 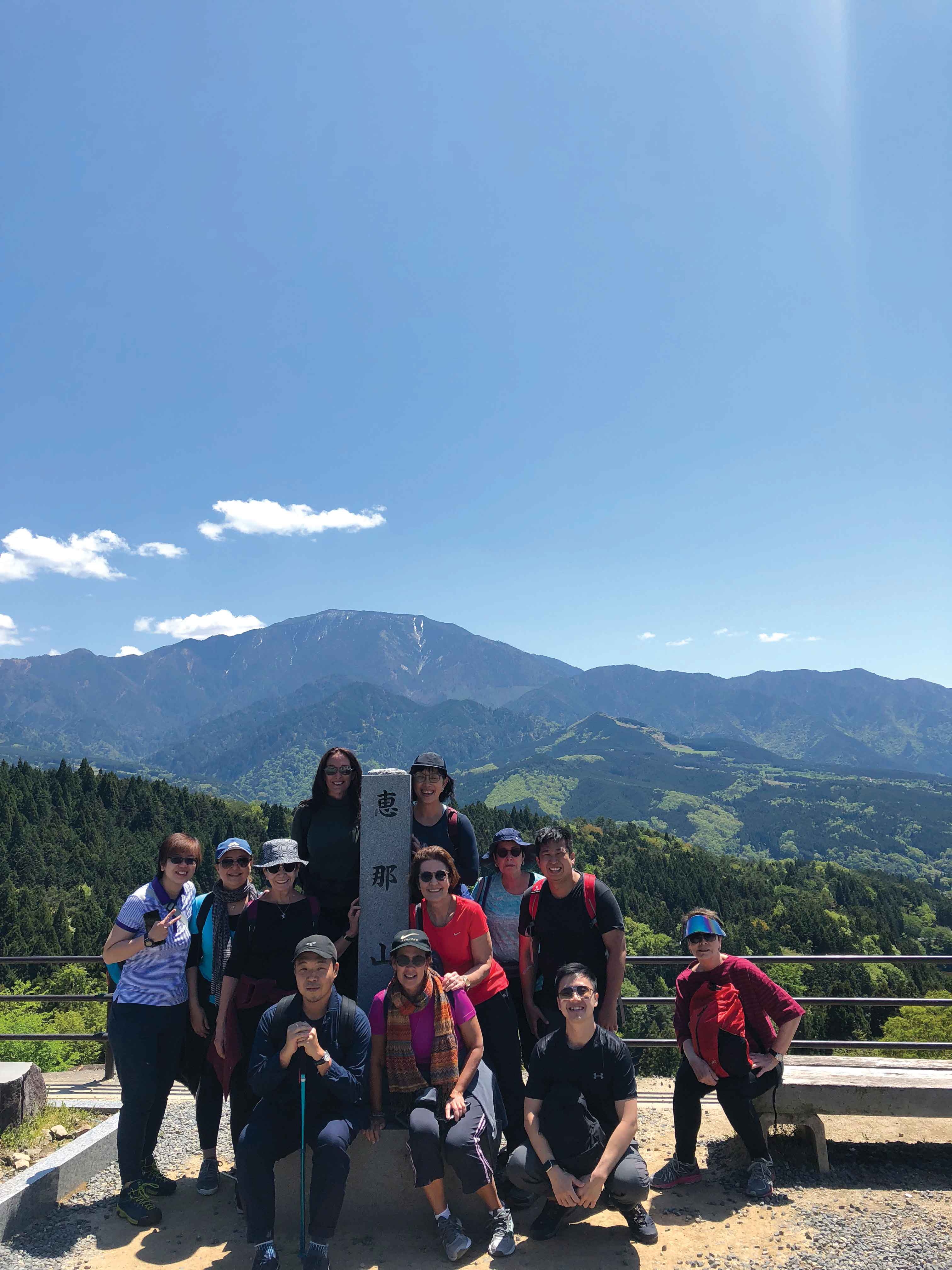 The author with the walking tour group

After several days of walking in nature and staying in peaceful family-run establishments, it admittedly felt strange heading back into the city. The group’s final night in Matsumoto allowed us to slowly ease ourselves back into the modern world, as well as look back on the few eventful days that were now part of our personal histories.

The new sights, sounds, and experiences definitely gave all of us a newfound appreciation of Japan’s more genteel side – one that proudly held on to a more traditional way of life, and one that endeavored to preserve and showcase cultural assets that seem to be overlooked by most.

Walking Into The Heart Of Japan