The Genevan manufacture selects Singapore as its fifth city for its Watch Art Grand Exhibition.

One third of watchmaking’s “Holy Trinity”; a name uttered on every collector’s wishlist; a late player to the Instagram game which left them undeterred to amass a following anyway.  Patek Philippe – a name synonymous with watch auction records and technical watchmaking pioneers that leave watches to be both desired and admired in its wake. Thus in sharing its grandeur, the Genevan manufacture is hosting the fifth Watch Art Grand Exhibition in Singapore from 28 September to 13 October.

Having first been in Dubai, Munich, London, and New York, Singapore is chosen as the city for the Exhibition this year in recognition for its dedicated watch community and being a key market in the Southeast Asian region. The Exhibition is large in scale, covering over 1,800 square metres and is divided into an adventure of ten thematic rooms.

‘Cinema’ is a screening of Patek Philippe’s history; ‘Current Collection Room’ is a showcase of the current collection, with its interior decorated after the Salon at home on Rue du ône; ‘Napoleon Room’ showcases the special limited editions created for the Southeast Asia market against a panoramic motion picture view of Lake Geneva as the backdrop; the Antique Collection and Patek Philippe Collection are housed in the ‘Museum Room’; ‘Rare Handcrafts Room’ is a show and tell of the manufacture’s artisanal techniques from enamelling to hand engraving; master watchmakers are found in the ‘Watchmakers Room’ to present the intricacies of assembling a Patek Philippe timepiece; ‘Grand Complications Room’ are a testament to the manufacture’s reputation, showcasing the most complicated and innovative watches the brand has ever created; from the minimalistic to the most complex, desirable in-house calibres are found in the ‘Movements Room’; ‘Interactive Room’ gives guests a sneak peek of a what a tour at the Genevan manufacture is like; ‘Singapore 200th Anniversary Room’ is in conjunction with Singapore’s Bicentennial year where select timepieces are displayed in parallel to the timeline of Singapore’s history since it was first marked by the arrival of Sir Stamford Raffles.

The Grand Art of Watches

The curation of museum pieces include the first Patek Philippe wristwatch, a watch from Queen Victoria, and the first wristwatch with perpetual calendar in 1925. Other highlights include notable feats, namely the Calibre 89, having been created in the year of 1989 to celebrate Patek Philippe’s 150th anniversary. Its complications are extensive, with more than 1,700 components operating but not limited to a perpetual calendar, moonphase, split seconds chronograph, astronomical indications, celestial chart, a grande and petite sonnerie, minute repeater, and retrograde date. The original calibre was fit in a yellow gold case with a dimension of 88.2mm in diameter and weighs 1.1 kg. The behemoth among the key highlights is the Sky Moon Tourbillon Ref. 6002G which is unabashed with its intricate case that’s entirely hand engraved in the white gold canvas. The motifs comprise of arabesque garlands and curved outlines of the Calatrava cross that goes over the entire case, including the pushers, lugs and even down to the hour and minute hands. Inside, the manual-winding movement comprises more than 13 complications through a black enamel dial. 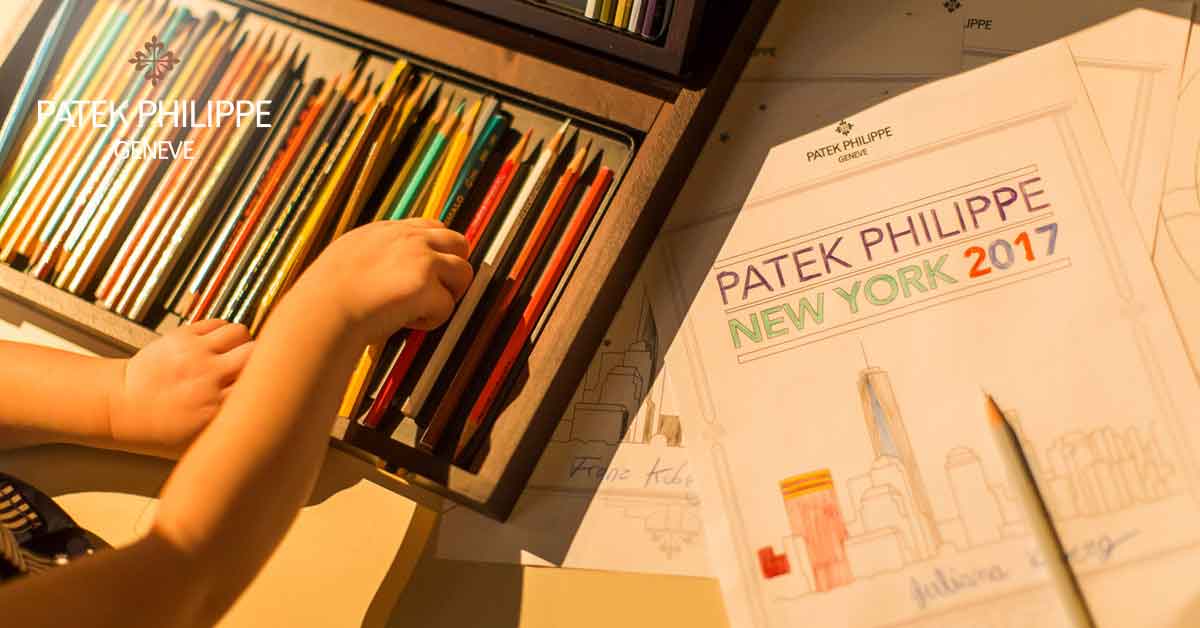 In the spirit of sharing the affinity for Patek Philippe with the next generation, the Exhibition is hosting thematic family-oriented activities over two Sundays, on 6 and 13 October. Families with children are welcome to spend the day where the young ones can experience being a Patek Philippe watchmaker.

Equipped with a watchmaking assembly kit, they can dabble with replica learner components in learning to complete a timepiece. And to get as close to experience what a family lineage of watchmakers feels like, there will be a studio set up where the whole family can dress in full watchmaker garb for a great photo moment.

Patek Philippe will also be bringing in their master watchmakers and artisans who will be performing demonstrations of their handicraft. From enamelling to marquetry, the public will be treated to live showcases, the materialisation of watch parts, and will also be able to interact with the watchmaking team for a more personable perspective with the brand.

The Patek Philippe Watch Art Grand Exhibition will be held at the Sands Theatre at Marina Bay Sands, Singapore from 28 September to 13 October 2019. Tickets are free with reservation made on www.patek.com.